in News
Reading Time: 5min read
A A
You are here: Home / Ent. / Star Fox Deserves More from Nintendo.
Like

(ThyBlackMan.com) Star Fox was released on the Super Nintendo in 1993 and was inspired by a combination of Japanese architecture and sci-fi TV shows such as Thunderbirds. I’d also say there’s some similarities to early 80s cult comic Bucky O’Hare.

Along with a series such as Donkey Kong, Star Fox really pushed graphics and innovation on the Super NES. There have been a few 3D games on the SNES but SF was at the top of that small hill.

Despite that, Nintendo hasn’t always been on top of things with the series. Quality-wise, games in the series have been decent and above with most being really good. As a whole, the franchise is highly praised.

Unfortunately, there are a few games compared to how long the series has been around. In short, Star Fox should’ve had more games in series.

The Premise of Star Fox

Taking place in the fictional Lylat solar system where there are plenty of anthropomorphic inhabitants, one planet headed up by an evil scientist declares war on a neighboring planet.

Since there has been peace in the solar system for years prior to the war, Corneria has no highly trained pilots for its new Arwing spaceships. General Pepper enlists the Star Fox mercenaries to battle the forces of Andross.

The four pilots are in for a war because Andross’ forces are well-armed, well armored, and numerous. To combat his forces, players will shoot and spin in multiple space battles.

Of course, they won’t be going it alone as their teammates join them in this rail shooter. You’re not getting complex battles or a lot of plot here. Instead, it’s straight up speed, lasers, bombs, and drawn-out boss fights.

Whatever you needed or wanted to know about the storyline could be found in the instruction manual. Beyond that, the game just drops you into your ship and you’re heading out of the launch bay.

The 1990s were a simpler time for video games where only RPGs and point-and-click adventure games really explained the story in-depth. That’s not necessarily a bad thing since space shooters never actually needed story.

Galaga, Centipede, and Space Invaders all have no plot in-game or…at all. Aliens are attacking and moving in one direction—that’s all you needed to know before diving in, really. 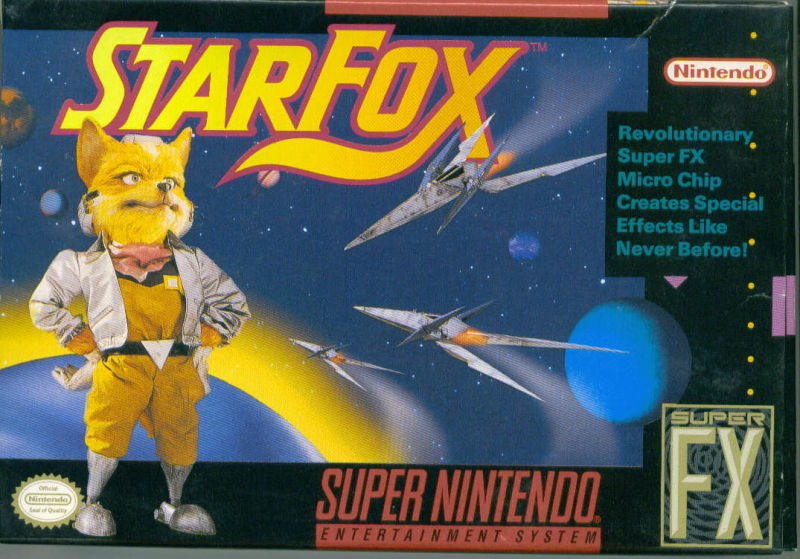 What Made Star Fox So Great

In execution, Star Fox isn’t that difficult—just like most rail shooters and side scrolling shooters. However, like most shooters of this ilk, the difficulty is what makes the game worth playing.

The first level basically allows the player to get the hang of the gameplay while building up to the first boss. After defeating that boss, you know what to do to sink bosses—it’s just a matter of not getting blown up while attempting to beat them.

Another thing that really popped SF was the 3D approach. By 1993, there weren’t many high-quality 3D games on consoles. Most that were around didn’t stick around years later.

Then Star Fox kicks in the door with 3D graphics that were basic by today’s standards but pretty damn impressive in 1993—especially on the SNES. It was the kind of game that had to make other developers sweat.

See, once something new comes along, if it doesn’t take off no one sweats. It’s just a failed concept that was either never going to work or was too early to really catch on.

3D was a concept that worked on PC but consoles in the early 90s weren’t that powerful to utilize the graphical advancements.

Nintendo is a company that is the best at knowing how to get the most out of its own console and if there’s nothing that can’t be done, the company would make the cartridge do the work to compensate.

Star Fox is one of a couple of examples to this. The SuperFX chip

Nintendo has tons of IPs with some being more popular than others. SF was one of those series that had a lot of love from gamers but not enough love for Nintendo to run the series at the same level as Mario, Zelda, Pokemon, Fire Emblem, and Metroid.

If I had to place Star Fox’s priority within Nintendo, it’s right there with Kid Icarus, F-Zero, and Earthbound. Let’s call it “C-tier” priority. All are series that have hardcore fans but not enough that it would warrant development time.

Remember, Nintendo takes forever between major games from major series. Several years could pass between games in a series with a few spinoffs in-between. With Star Fox not being a major priority, it’s release history is spotty.

I mean, Star Fox 2 was to come out in 1996 but wasn’t released until 2017 on the Super NES Classic Edition mini-console. Nintendo opted to shelve the series because of the PlayStation and Sega Saturn’s 3D graphics.

On one hand, I believe that SF should get more attention from Nintendo and we should’ve seen more SF over time if just for the series pulling the company closer to the next generation than its other titles.

However, the space-based rail shooter today is a novelty for gamers who dig retro games. If SF was to pop in this decade, it would take a mixture of the shooter mechanics that brought the series to the dance and more of what 2002’s Star Fox Adventures and 2005’s Star Fox Assault were.

This talented writer is also a podcast host, and comic book fan who loves all things old school. One may also find him on Twitter at; metalswift.

The next crisis? Homelessness. – POLITICO