in News
Reading Time: 6min read
A A
Like

(ThyBlackMan.com) In-car entertainment systems have come a long way ever since the inception of mainstream automobiles. You would be hard-pressed to find even basic radio systems in cars till about 1922 when radios actually made their way into the in-car entertainment sphere in passenger vehicles.

Fast forward a few decades and FM radio came into the mix with high-fidelity audio in the 1950s.

Subsequently, the market saw a rise of in-car record players that vaunted quick response timings due to their complexity and higher prices. Not long after, the eight-track players took the center stage for almost three decades before they were replaced by the CD players in the late ’90s.

But with the start of the 21st century, in-car entertainment systems have skyrocketed and adopted a new-fangled approach, with almost every aspect of the system going completely digital and CD players becoming obsolete. Even new cars are equipped with advanced features nowadays including touchscreen systems that get smartphone connectivity, streaming services, internet radio, and a whole lot more.

However, the concept of modern in-car entertainment systems is not just limited to the newer vehicles entering the market. There are several cars on the used market that are equipped with best-in-class features and yet, save you a couple of thousand dollars. A Used Nissan Versa for sale, for instance, sports modern amenities like Bluetooth connectivity, voice recognition, and commands, and smart device integration.

Modern cars like the Chevy Trailblazer come loaded to the gills with advanced entertainment systems including an 8-inch touch-screen infotainment system paired with a 7 speaker Bose premium sound system, wireless smartphone connectivity through Android Auto and Apple Carplay with wireless charging, SiriusXM satellite radio, and a lot more which is a significant improvement compared to how entertainment system looked just 10 years ago.

With such advancements in technology in just two decades, we’ll take a look at what to expect in the future and some of the most promising technologies that will grace cars in the times to come.

When cars are finally able to drive themselves, we will enter the next generation of car entertainment with limitless possibilities. Without concentration on driving, all passengers can relax and watch a movie or even play video games. Tesla has already taken an initiative by providing an upgraded center display on newer models that grants access to Netflix and other streaming services. 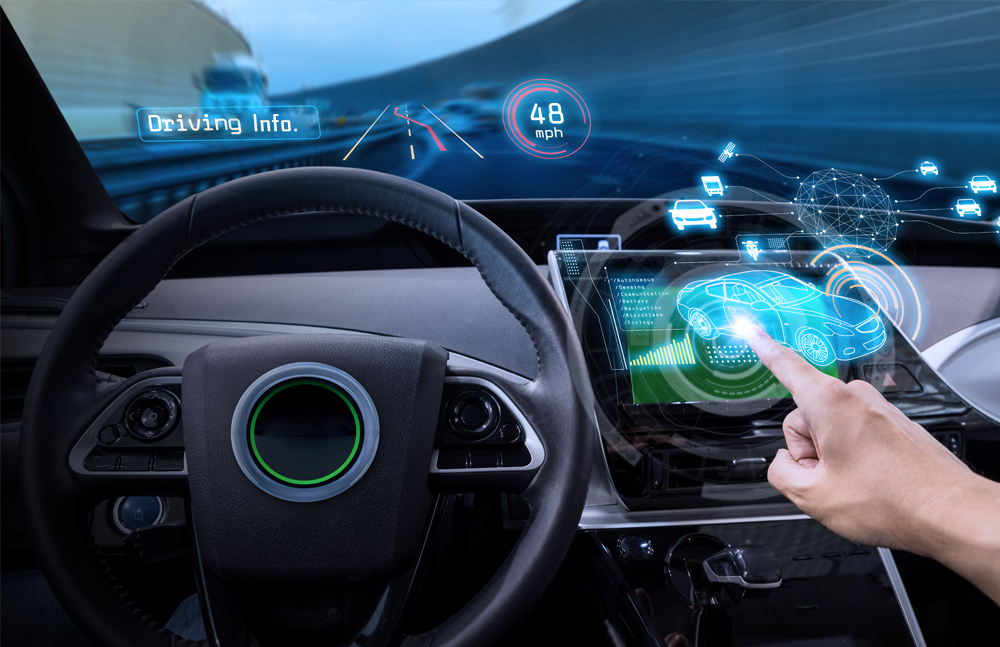 A lot of advancements are being made in the realm of speakerless technologies, especially by Sennheiser and Continental. Continental’s Ac2ated technology uses pulse motors on surfaces to excite them and create sound, similar to how string instruments use open chambers to amplify noise.

The actuators can be placed on the A-pillars, door trims, and roof linings, and will take considerably less space than conventional speakers. Currently, Sennheiser’s 3D AMBEO software is being used to make the system work. The new speakerless system will allow a more immersive and natural sound experience, further opening new audio perspectives.

A major advantage of these speaker systems is their low weight, which can help aid performance. Conventional systems can weigh upwards of 40 kg, however, a shift to the speakerless audio systems can significantly reduce the weight by more than  90%. It will also allow better packaging of the interiors because of the space created by eliminating conventional speakers, and subwoofers in the baggage area, allowing for cleaner and futuristic interiors.

With the new speakerless technology, carmakers can also reduce the amount of soundproofing used in cars especially if it uses the advanced active noise-cancellation system, reducing weight further.

On a similar note, active noise cancellation is also being improved significantly in recent years. In the latest effort, Hyundai is working with Harman to improve the system, a majority of cars on the used market use the latest technologies to mask out external noises and even block out engine noises filtering into the cabin.

The new Road Noise Active Noise Cancellation (RANC) system is designed to improve NVH levels by installing several microphones around the car, even in the wheel arches. The noise is then sent to a processor which will calculate the opposite sound waves, further improving NVH levels. The improved RANC can be expected in upcoming Genesis models, and will soon find its way to most modern cars, improving the overall in-car experience.

5G technology will soon be upon us and will shift the market into a more sophisticated and advanced form of operations, which will significantly improve internet speeds and streaming services. It will also allow high-definition games and movie streaming directly into the car. It will also allow a lot of technologies that may come in the future like VR technology, interactive entertainment, and more, that work flawlessly credits to the extra bandwidth.

A major development in the future of in-car entertainment could be vehicle-to-vehicle communication, which can open up a lot of possibilities. Amongst its suspected applications, it can allow multiplayer connectivity, further improving the in-car gaming experience. Soon, you’ll be able to play games and share messages with other cars on the road.

Voice control has been around for a while now but it is mostly limited to the infotainment system. New technologies are being developed which provide a personalized voice assistant in cars, allowing passengers to control various features and functions of the car without fiddling with any buttons or getting distracted.

While the availability of Amazon Alexa in the recently launched vehicles has aided control and safety inside the car, soon, you’ll be able to customize your assistant with your preferences. The idea behind voice-controlled personal assistants is to create a bond between users and vehicles and also to ensure a hassle-free driving and riding experience.

An evident step towards the actualization of mixed reality navigation can be seen through HERE location services partnering with Verve for location-powered video and display marketing, which will allow brands to trigger in-vehicle opportunities.

Driver assistance systems are improving significantly in recent times, with fully autonomous driving slated to arrive soon. This leaves plenty of opportunities for manufacturers to transform the passenger space into a cinema, gaming room, or even a personal workspace.

Soon, cars will come equipped with several wide touchscreens which will offer an improved visual experience similar to the “Hyperscreen” that Mercedes-Benz has provided in the newly launched EQS electric sedan. Recently, DURA Automotive Systems showed off a unity concept system designed for self-driving vehicles. It uses multiple screens including a 48-inch center display, which allows all passengers to interact simultaneously and view their own multimedia content. It will also allow the passengers to play video games with each other.

Already advancements are being made for directional audio inside the cabin including ultra-near-field speakers mounted on the headrests, which will allow passengers to listen to their own music and services. Bose’s SeatCentric technology is the most promising development so far for personalized audio and could translate into being a reality soon.

The demand for technologies continues to grow, and with the development in the last 10 years, we can expect a lot more advancements in the near future, that can make our lives easier and more immersive by being intelligent systems capable of executing their own operations.

Boosting the representation of Black students