in Culture, Latino Americans
Reading Time: 8min read
A A

Next Tuesday, July 13, it is expected that the New York City Board of Elections (BOE) certify the majority of the results that the primary elections last June 22. And in addition to the triumphs facing the general elections in November, in positions such as the Mayor’s Office, the Comptroller’s Office and the Ombudsman’s Office, where Eric Adams, Brad Lander and Jumaane Williams were successful, victories will be confirmed in the 51 chairs of the Municipal Council, which already show that the next legislative body will be more inclusive, more representative, and for the first time it will look more like New York City.

With the renewal of the vast majority of seats, and with feats like the one that instead of 14 women councilors there were, it is estimated that there will be 29that is, the majority in that chamber, the eventual arrival of 16 Latinos, dozens of activists, social workers, African Americans, immigrants from countries such as Belarus, Bangladesh, Korea, Colombia, Panama, tenant advocates, and LGBT politicians, New York leaders assure that New York will walk towards a fairer and more equitable course.

This was highlighted Murad Awawdeh, executive director of NYIC Action, who applauded the twist that the city ​​Council it is giving, and the arrival of more progressive voices to that organism.

“With the votes finally counted, we know that the most important elections in a generation resulted in an incredibly diverse and progressive roster of Council members “said Awawdeh. “This year, the future of New York and the nature of our recovery from COVID-19 and the economic downturn were on the ballot. And in response, New York voters sent leaders to the Council who understand how essential our immigrant communities were during the pandemic and will be to our recovery. “

The New York leader stressed that there will be community politicians who were re-elected to their positions, including Latino figures such as Councilor Francisco Moya, from District 21 of Queens, Carlina rivera, by District 2 and Rafael Salamanca, from District 17 of the Bronx, who together with the new blood that will arrive at City Hall, give hope to diligently address the main needs of the most vulnerable.

“Whether incumbents with strong advocacy records or first-time candidates looking to shake up politics as usual with a progressive vision for the city, each of these individuals campaigned on platforms that clearly underscored your commitment to giving a voice to New York immigrants and ignored working families for too much time”, highlighted the director of NYIC Action. “Now more than ever, we need leaders at all levels of city government to ensure opportunity for all. So while we wait for every vote to be counted, we celebrate the progress we made towards building a more inclusive city! ”

“The New York City Council represents 2 million Latinos and the proposals in this government impact the day-to-day life and quality of life of our community. It is extremely important that Latinos have Latino representatives on the Council who can advocate for the issues that affect them the most, such as increasing access to health care, the opportunity for jobs and a living wage, and a better education for their children. ”, Nathalie Rayes assured, president and director of the organization Latino Victory Fund, highlighting the eventual increase of Hispanics on the Council.

“It is clear that New Yorkers recognize the importance of having a government that reflects the communities it represents and of electing candidates who speak for their families. Latino Victory supported 12 candidates for the City Council, and we are very hopeful with the victories of candidates like Tiffany Cabán, Pierina Sanchez, and Shaun Abreu, among others, ”added Rayes. 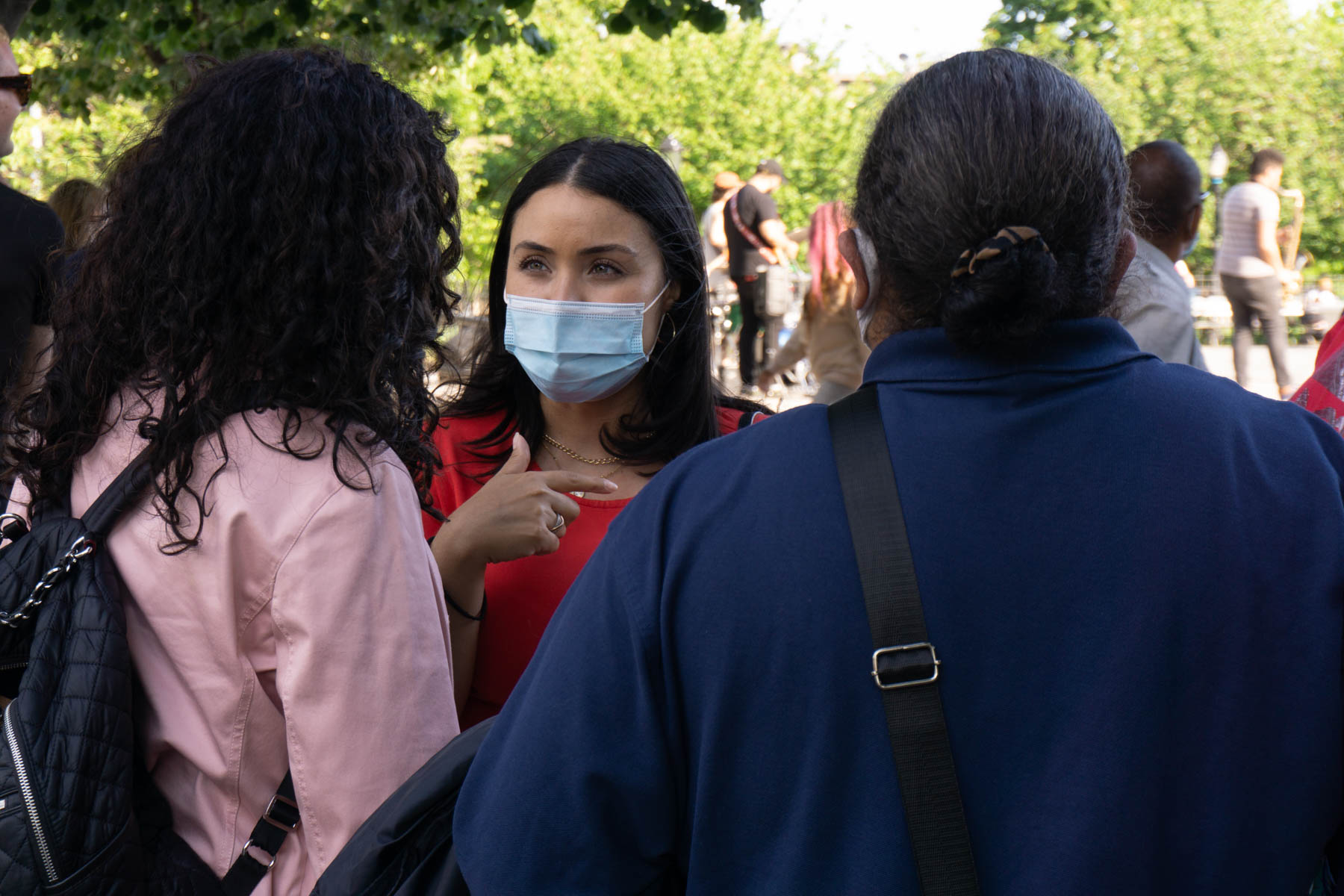 The organization Make the Road Action (MRA) who was mobilizing voters and who supported winners like Sandy Nurse, Jennifer Gutiérrez, Lincoln Restler, Tiffany Cabán and Shekar KrishnanHe showed that the effort was worth it and they advocate for the Municipal Council to push for changes in various issues such as housing, safety and health.

“During this primary election, MRA endorsed candidates who support their members on key issues, such as withdraw funds to the NYPD, fund public education, invest in deeply affordable housing, protect immigrant workers, guarantee access to health care for all, remove police officers from schools, ensure that non-citizens can vote in municipal elections, decriminalize sex work and more, ”said that organization.

Theo Oshiro, co-executive director of Make the Road Action, also called for community voices to be heard and for change to be achieved.

“Our members reached out to hundreds of thousands of black, Latino and working class voters to demand that our communities be at the center of our city’s recovery,” said the activist.

Given the panorama of what will be the next Municipal Council, which must formally be confirmed after the November elections, and which will begin work with the new local administration in January of next year, the re-elected Councilor Francisco Moya, noted that voters chose a more diverse body, hoping they will successfully cope with the Big Apple’s recovery from the COVID pandemic.

“The pandemic highlighted the inequities that have existed in this City for far too long, prompting many New York voters in this primary election to elect an administration that represents the diversity and needs of NYC“Said the political leader of Ecuadorian origin. “With the potential to have approximately eight new Latino councilors and a Latino Council president, plus an African-American candidate in Eric Adams, who won the vote of Latinos and the communities most impacted by COVID, including East Elmhurst, Corona and LeFrak City, it will be something very positive for our community throughout the City. “

Sochie Nnaemeka, director of New York Working Families Party, was also very optimistic about the future of the Big Apple, with a more representative Council.

“Our new delegation from Brooklyn will fight to build a city for the many, not the few”Said Nnaemeka, highlighting the overwhelming triumph of the candidates they supported in that county. “Right now, Brooklyn is plagued with rapid gentrification and great inequality. This vicious cycle has been aided and abetted by too many elected officials backed by corporate real estate and billionaire donors. But the winds in Brooklyn are changing course. By electing advocates for working families, voters confirmed their appetite for a fairer and more equitable city, and rejected the scare policies of Wall Street and the PBA. “

Jennifer Gutierrez, who won the Democratic nomination for the 34th District of Brooklyn, and who will be the first councilwoman of Colombian origin, highlighted as a triumph that there is a more diverse City Council.

“By having a more inclusive Council, I hope that we focus on affordable housing, since we are in a crisis, the responsibility of agencies and public safety, something that I hope to be able to work hand in hand with Eric Adams, with whom despite not share your vision of sending more police officers to the communities, I know that it is someone who knows the communities, who wants to work well and I hope there is a possibility that they will listen to the representatives of the communities ”, added the future councilor.

Also, the winner of the contest for the 10th District of Manhattan, Carmen de la Rosa, who will replace Ydanis Rodríguez, one of the main Latino figures of the current City Council, said that the seal of the next Council will be given by diversity, the power of women and a progressive vision.

“These elections showed that the city wants a change. We exceeded the expectation of having 21 women on the Council. There was a mandate from the voters who asked that our communities be represented in a more fair and equitable way, that women, Latinos, immigrants and leaders of different groups deserve to have positions of representation that exercise their power, ”said the Dominican politician, who is currently state assemblyman.

“Many of us who will come to the Council move with progressive ideas, which in reality what they seek is to move policies and decisions that are fair for the majority in matters such as fair pay, work, tenant lives, access to services, education, health and better conditions to get ahead after the pandemic. I see a promising future in sight ”, De la Rosa concluded.

Winners of the Municipal Council primaries

Contest yet to be defined:

Competitions without an opponent

Behind Zaila Avant-garde’s Win, a History of Struggle for Black Spellers