in News
Reading Time: 6min read
A A
You are here: Home / Money / Business / Asian Hate Crimes by whom? Whites or Blacks or Asian Themselves.
Like

(ThyBlackMan.com) Here we go again with the white men of America infected with the disease of madness, insanity, insecurity, fear and the shortcomings of having a small penis going around committing mass shooting against innocent civilians but mainly against minorities; Yet, they do not get charged with hate crime right away or not at all; instead, the judicial system find excuses for these racist animals such as having a bad day, sex addiction or emotional instability has the cause of their killing spree.

About a couple of months ago a Racist white man (Robert Aaron Long 28 years old) with a small penis in Atlanta Georgia killed over (8) eight Asian woman and injured a few more, but the justice and police department states that he had a sex addiction problem and a bad day; therefore, He cannot be charge with hate crime. Yet, In New York, A black man punches a Chinese man a couple of times on the face and He was immediately charged with a hate crime, then in another incident a black man who was release from prison in 2019 after serving 17 years in jail for killing his own mother (obviously a 5150 mentally ill person), proceeds to attack an Asian woman by pushing her on the ground and then kicking her a few times; thus, resulting in her hip been fracture and He is immediately charged with a hate crime. In the last two incidents the two black men did not kill the Asian victims but they got charged with a hate crime: Yet, the racist white men in the massage spa that kill more those eight Asian women was Not immediately charge with hate crime but instead charge with malice and having a bad day.

Eventually, months later the district attorney decided to proceed with a hate crime charge. Now, the question is why is there double standard with hate crime? The answer is simple: White people have more privileges’ and immunity than any other race in America and of course it will take about two months for white America to charge a white man with a possible or allege hate crime but when it is a black suspect he or she is charge within 20 minutes as a Hate Crime. 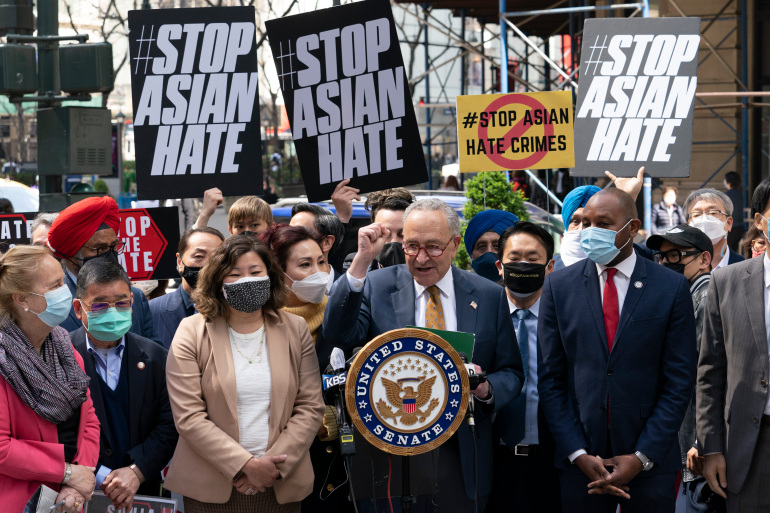 Again, America one country with two laws. Anyone, regardless of race that attacks another person of another race should be charge with a hate crime and put to death; Therefore, making the justice and law equal and applicable to everyone. America is attempting to create a narrative that black people are racist towards Asian but it is quite impossible since Asians depends on blacks and blacks depend on Asians.

The Asian Americans own the majority of business in the black community and yet they do not hire no blacks; Yet, 90% of their customers are all blacks. The black American wealth supports the Asian community businesses and allows the Asians to live a comfortable live in the suburbs, as well as, sending their kids to college, and sending money back to their Asian countries. All the nail salons, beauty shop, and fast food restaurants in the black community are owned by Asian Americans and they only hire their own Asian people and refuse to hire black American men and woman who are the ones who spend their black money at those Asian businesses.

Since President Creepy Joe Biden have been president elect with the support of 92% of black woman vote and 86% of black men vote, He had not signed or done anything for the benefit of the black men and black woman of America. In the first 100 days of Biden presidency, He signed into Law the Hispanic Prosperity Act, The LGBT discrimination act, The Asian protection bill against Asian and Pacific Islander hate crimes, he gave the Asian community 50 million dollar, and he has proposed the bill to make over 11 million illegal immigrants permanent residence with guaranteed job; Yet, what has President Biden done for the black men and black woman of America that put him in the office?

The Answer is Nothing! and he will not do nothing for black people because White America does not intend to change any agenda to protect, empower, encourage, or pay any reparations of slavery for black America; even though, America gave reparations to the Japanese for the concentration camps during WW2 and for the bombing of Hiroshima and Nagasaki cities in Japan. America also gave reparations to native Americans and to the Chinese descendants of those who work in the construction of the inter-continental railroad and lest not forget that white America gave the Jews of Europe reparation and compensation every year for what they endure under Hitler in Germany during WW2.

Now, where is the justice for black America and more so the Black men who are constantly discriminated against on a daily basis by racist white America and by Racist insecure white men with small penises. Black men in America are denied jobs, business grants and loans while immigrants from Asian and middle east arrived without even speaking any English, and having no credit history received more benefit, loans and grants to open businesses. Even if a black man in America holds a college degree, military background with no criminal record, good credit history, no drugs etc. White America will not to hired him, give him loans and grants compare to other minority races in America.

Nonetheless, the issue at hand is that Racism affects all minorities but the blacks are ignored while other groups reap the benefits at the expense of the death of a black men and woman or the imprisonment of a black men or woman. In order to have justice and equality we should implement the same law to all regardless of race, creed, religion; therefore, a white man that kills a minority person should be charged with a hate crime and put to death; as well as minority who kills a white person or another race should be charged with a hate crime and put to death. But, obviously this cannot be implemented because the white men will suffer the most since he is the most racist individual in America and the most insecure with his small penis and the understanding that integration is the collapse of white America and within 50 years from today date white America will be the minority race of America.

More so, let’s not forget that when a black man impregnates a white woman the baby comes out black; but when a white man impregnates a black woman their baby does Not come out white but instead comes out black or 60% black and 40% white. Indeed, the black gene or genome is dominant while the white gene or genome is recessive which the greatest fear of white men knowing that black men have the power to eradicate the white race from the face of the earth.