in News
Reading Time: 5min read
A A
You are here: Home / Ent. / Ranking the Grand Theft Auto Spinoffs.
Like

(ThyBlackMan.com) Before we rank the Grand Theft Auto main series, let’s look at the spinoffs the franchise has produced. In total, there are five spinoffs, four DLC and extra mission packs, and five games in the main series.

Let’s see which game tops the spinoffs and which one brings up the rear!

Grand Theft Auto: San Andreas is goated as one of the greatest games of all time and one of the best in the GTA franchise. Hands down, this is a hard number two to GTA V.

To get into why San Andreas is a masterclass in Rockstar Games’ storytelling and development would require its own article, I’ll just note that it features a lot of stuff that should’ve become stock in the series.

For some reason, most of the features didn’t translate to other games which resulted in an older game being more involved than a few that came after. I’m talking about training, gambling, and gang wars.

These particular features were peppered into future games but to be honest, the whole shebang should’ve just been copied over and improved over time. GTA V, which takes place in San Andreas’ Los Santos would replicate what made San Andreas the goat and improve upon a lot of the features.

Also, thumbs up for a Black lead and basing it in the 90s. That was incredibly outside of the box not just for Rockstar but for games in general at that time. It allowed Rockstar to make an actual living, breathing trio of cities for the game with each having its own vibe, distinct neighborhoods, and so on. 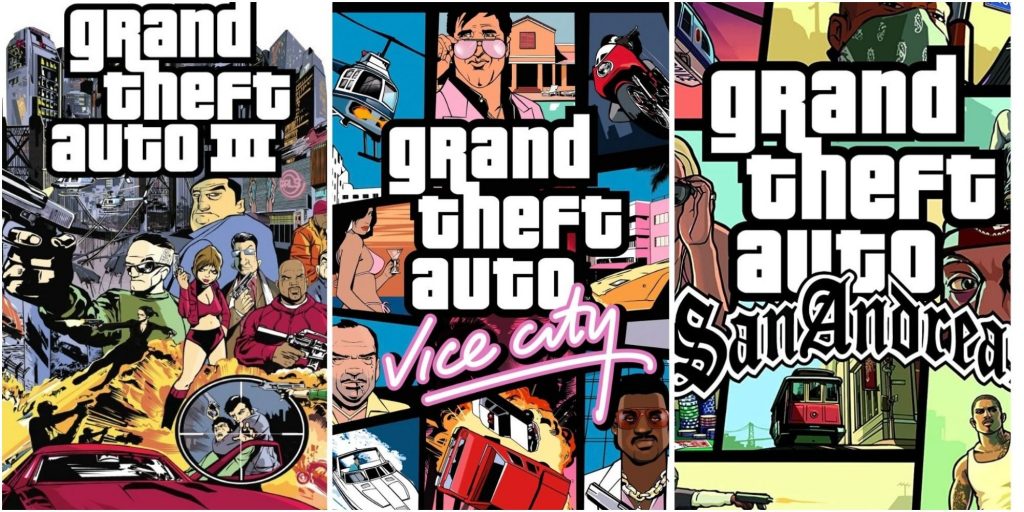 This game takes place two years before the legendary GTA: Vice City in 1984, Vice City Stories puts you in the role of Victor Vance, the older brother of Lance—who becomes Tommy Vercetti’s ally and later the final boss in 1986.

Actually, Victor dies in the opening scene of Vice City but before that, he was discharged from the U.S Army for drug trafficking. He begins a drug empire in Vice City with his brother in an adventure that was actually more enjoyable and involved than VC.

That’s what few GTA fans mention: VCS was better than VC. You have all the general Grand Theft Auto shenanigans and chaos but the turf war mechanic from San Andreas becomes prominent here as the Vance Crime Family has to hold on to areas where they have investments.

Oh yes, there’s a sliver of business management here as you can open front businesses or take over turf from the other gangs in the city. After that, the player has build up the businesses to bring in more money while also defending against gangs who want to take their turf back.

Technically, this position on the list is 1.5 because I dig the neon 80s setting more than 90s San Andreas. Unfortunately, VCS doesn’t have as robust a story as San Andreas.

I love Chinatown Wars.It’s not the most innovative spinoff and is very much stock GTA but it has a few things going for it. First is that this was one of two Grand Theft Auto games on Nintendo handhelds. To date, there have been no games on Nintendo home consoles.

So, this was a significant get for Ninty which has long been considered the company for “casual gamers”. We also see a return to the series’ roots with the overhead perspective being used.

What really puts it over our next entry is the edition of extra stuff to do. In Chinatown Wars’ case, we have the drug trafficking mini-game which is a throwback to the classic calculator and PC game Dope Wars.

It’s just a notch above the last entry for that reason. There’s another activity to do that you see in all GTA games—just like the two above.

Liberty City Stories was a good entry into the Grand Theft Auto series. It’s the direct prequel to GTA 3—or the weakest of the 3D era GTA games—and features more story than GTA 3.

I say there’s more story but GTA for the most part wasn’t keen on plot. For most of the series, it was always a guy arrives in town or returns to town and gets involved in a lot criminal mayhem with the different gangs.

Liberty City Stories is no different nor are the other four three entries. Toni Cipriani is definitely a better protagonist than silent Claude but that could be said about any Grand Theft Auto main character.

This title sits near the bottom of the list mainly because of the stock GTA gameplay. There’s nothing wow-worthy here. If you’ve played GTA 3 or Vice City, you’ve pretty much played Liberty City Stories.

Released on the Gameboy Advance, GTA Advance is actually one of the most basic of Grand Theft Auto games overall. While it looks fine on the GBA and the gameplay is solid, it’s in the same company as the original games.

Obviously, there was only so much that could be done with GTA on the GBA but we’re still in basic city territory here. If I hadn’t remembered GTA Advance was a thing, Liberty City Stories would’ve been stuck bringing up the rear here, folks.

This talented writer is also a podcast host, and comic book fan who loves all things old school. One may also find him on Twitter at; metalswift.

The Week Ahead in Franklin/Somerset: July 6 to July 9