in News
Reading Time: 5min read
A A
You are here: Home / Money / Business / Nichols/Taylor ESPN drama and Black women being “double minority”.
Like

(ThyBlackMan.com) “I am a Black Feminist. I mean I recognize that my power as well as my primary oppressions come as a result of my Blackness as well as my womaness, and therefore my struggles on both of these fronts are inseparable.”-Audre Lorde

Days ago, a New York Times report released on July 4, 2021 included portions of a leaked July 2020 conversation by ESPN host Rachel Nichols as a conversation between Nichols, LeBron James’ agent Rich Paul, and James’ longtime advisor Adam Mendelsohn was accidentally recorded by Nichols herself when she forgot to turn her video camera off and was transmitted to ESPN’s video servers. The major part of the conversation between Nichols, who is a white woman, and Mendelsohn, who is a white man, was the mention of ESPN host Maria Taylor, who is a Black woman. “I wish Maria Taylor all the success in the world — she covers football, she covers basketball,” Nichols said in July 2020. “If you need to give her more things to do because you are feeling pressure about your crappy longtime record on diversity — which, by the way, I know personally from the female side of it — like, go for it. Just find it somewhere else. You are not going to find it from me or taking my thing away.” Nichols bemoaned that she had been skipped over to host “NBA Countdown” during last year’s NBA Finals and was instead offered a sideline reporter job. 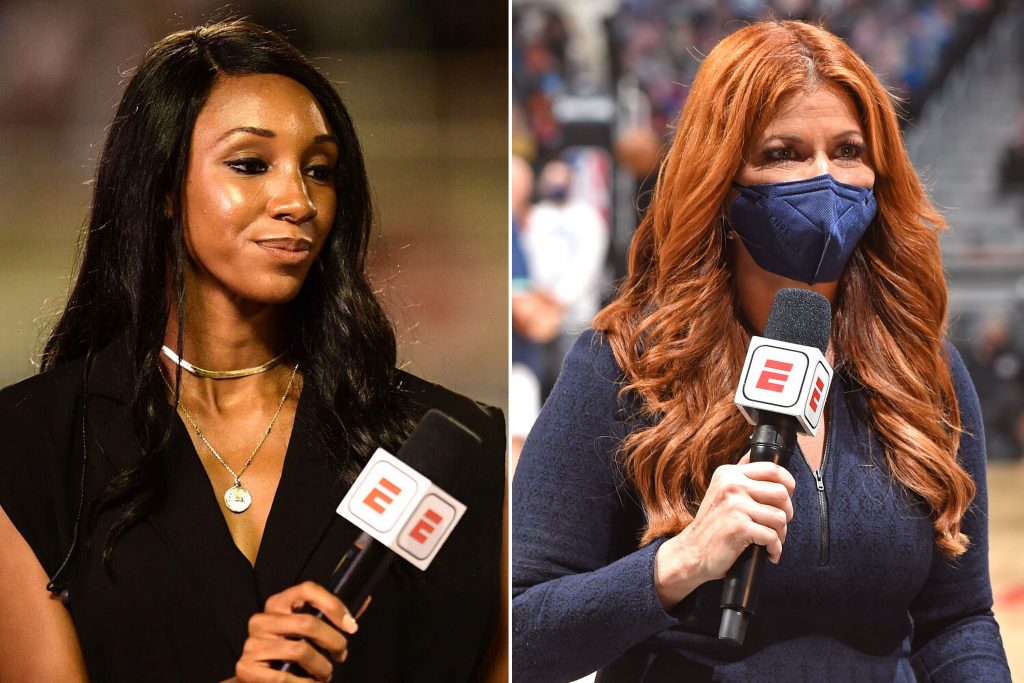 The leak of Rachel Nichols’ comments has had significant impacts on ESPN. Maria Taylor, the versatile ESPN host who covers a variety of sports in different ways, was sent the leaked video by a digital video producer for ESPN, Kayla Johnson, who is also a Black woman. Johnson was suspended for two weeks without pay, and later was given less desirable tasks at work. Nichols’ comments also led to a near-boycott by ESPN’s NBA analysts over ESPN’s handling of the situation. Taylor considered leaving ESPN in 2020 over the comments but reconsidered after the network agreed that she and Nichols would not interact on-air by pre-recording all of Nichols’ sideline segments on “NBA Countdown.” It’s fair to say that the comments created a huge mess.

In the days since the leak of Rachel Nichols’ comments, she “apologized” on-air on the ESPN show she hosts, The Jump. Nichols said, “The first thing they teach you in journalism school is don’t be the story, and I don’t plan to break that rule today or distract from a fantastic Finals. But I also don’t want to let this moment pass without saying how much I respect, how much I value our colleagues here at ESPN, how deeply, deeply sorry I am for disappointing those I hurt, particularly Maria Taylor, and how grateful I am to be part of this outstanding team.” She also was removed from being a sideline reporter for this year’s NBA Finals and replaced by ESPN journalist and reporter Malika Andrews, who is Black.

The comments that set off this controversy made by Rachel Nichols in 2020 are reflective of how Black women have to navigate a society that views them as a “double minority”. A survey conducted by the Gallup Center on Black Voices between Nov. 6 and Dec. 1, 2020, found that Black women are less likely to feel they are treated with respect in the workplace. Nichols comments show that as a white woman she is aware of the sexism of a male-dominated work environment within ESPN and the sports media but she disrespects Maria Taylor by intimating that Taylor was given a better role within ESPN than her because of the company’s lackluster racial history with hiring and promotion. Despite Taylor’s work history of working her way up to her current success, her “colleague” still said what she said in a moment of honesty when she believed no one was listening. Despite Black women having success in education and entrepreneurship, they still face ignorant attitudes and mindsets from white women, who have long tried to be allies in the legitimate fight against patriarchy.

Black Bookstores a Year After a Summer of Protests