An upstate New York police officer has been placed on administrative leave after he was caught on camera punching a woman in the throat and knocking her onto the ground during an arrest, according to DeWitt Police Department spokesman Lt. Jerry Pace.

Rory Spain has been identified from body camera footage as the officer who punched Tyreana Edmonds in the throat during the incident.

On July 4, police were called to an East Syracuse Walmart after a fight allegedly broke out between five to six people. Employees were allegedly threatened during the altercation and struck in the face by two women who also allegedly pepper-sprayed customers, Pace said.

Pace alleged that store surveillance footage captured the “initial altercation,” in which he said that Edmonds was seen “arguing with employees and striking them in the face” while Tajenik Byrd, another woman who was identified as Edmond’s sister, pepper sprayed “multiple individuals.”

The surveillance footage begins as Edmonds and Byrd appear to already be aggravated, but does not show if any previous events caused their aggravation.

Next, in body camera footage from multiple officers including Spain, the two women are placed into handcuffs by officers. One of whom, identified as officer Corey Buyck, took Byrd to the ground and appears to place his body weight on her while handcuffing her. In the footage, Edmonds is heard telling officers that Byrd, who she says is currently pregnant, was “jumped.”

Finally, in bystander footage capturing officers dragging the two women away, Spain is seen winding his arm back and delivering a blow directly to Edmonds’ neck with his fist after Edmonds appears to try and bite Spain’s arm.

Cell phone footage also captured several bystanders appearing to argue with officers as they forcefully attempted to restrain the two women. Spain yells at surrounding bystanders to “back off” as he straddles Edmonds after the punch. 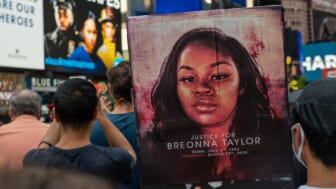 Byrd was charged with third-degree assault, fourth-degree criminal possession of a weapon, endangering the welfare of a child, possession of a noxious material, resisting arrest, and obstruction of governmental administration.

They were both released later on desk appearance tickets.

According to Pace, “conclusions about whether the actions of the officers are consistent with department policy and the law will not be made until all facts are known and the investigation is complete.”

According to Syracuse.com, a protest of roughly 25 individuals was held Friday in front of the Dewitt Police Department.

Hasahn Bloodworth of Rebirth SYR, a community organization “committed to advocating for change in the way Black and Brown people are treated when they interact with the police” per their Facebook page, said he organized the protest.