Man shoots couple at Houston aquarium before killing himself

The gunman and victim of a murder-suicide at the Houston Downtown Aquarium on Thursday have been identified. 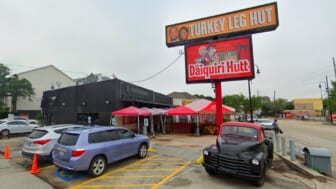 The shooting occurred at 410 Bagby Street and left two people dead in the bar area on the second floor of the aquarium, Fox 26 Houston reports.

According to the Houston Police Department, 28-year-old Gabriel Moriones Vargas and his wife were having dinner when 39-year-old Danny Cazares approached the couple and began shooting. Vargas died on the scene, but his wife survived and is reportedly in stable condition.

The couple was in town visiting Houston from New York and had no personal connection with Cazares.

Police said surveillance video showed Cazares sitting at the bar at the aquarium before he walked to the far end of the bar where the couple was seated and fired multiple shots at them before turning the gun on himself.

“This suspect got up, and in a very quick manner, went around the bar to the area where the male and female were together,” Houston Police Executive Chief Matt Slinkard said at a press briefing. “At the time, the suspect immediately started firing rounds. The deceased male immediately went down.

“The female who was injured went down as well, and then, from the footage that we’ve seen, this person we know to be our suspect that’s deceased on the scene immediately committed suicide with one self-inflicted gunshot wound.”

The motive in the shooting remains unknown. Police said a statement from the female victim indicates she and her husband did not know Cazares.

“We still have a lot of investigation to do,” Slinkard said, adding, that “preliminarily, it appears that there was very little, or possibly no interaction at all” between the couple and the killer prior to the shooting.

“This is the type of situation that should make us all pause for all of the families and all of the lives that will be affected,” Slinkard added.

A woman who was inside the restaurant at the time of the shooting said she heard about four or five gunshots.

“Everyone started to run in one direction of the restaurant,” Elaine Khalil told ABC13. “There was panic and pandemonium.”

She added, “It was a weeknight near closing so it was half full,” said Khalil. “We just followed the crowd into this small room that kind of curved around. Everyone was trying to get around. Another person was yelling to shut the door. Then the wait staff, they were very composed, they led us to a back staircase where everyone ran out.”

The Downtown Aquarium issued the following statement a day after the tragedy:

“Our deepest condolences go out to the victims and their families during this difficult time. This was an isolated incident and a senseless tragedy by someone who appears to have been facing personal conflicts. If you know of someone struggling with mental health or suicidal thoughts, please contact the National Suicide Prevention Lifeline at 1-800-273-TALK (8255).”

According to reports, Cazares was out on at least three previous bonds — on charges including felony possession of a weapon, which he obtained in April. He was also charged with trespassing in September 2020. The third charge stems from criminal mischief in October 2020.

The family of Cazares told Eyewitness News he was “a sweet man” who suffered from schizophrenia and had been hospitalized in the past.

Anwar Ditta: The mother who took on the UK government and won | History